Girder forks were used up to 1948 on the ‘M’ group, up to 1940 on the ‘B’ group and up to 1946 for the ‘C’ group, although telescopic forks were also fitted to the C Group in 1946. The telescopic forks fitted to all post war models were designed by Herbert Perkins during the Second World War and were based on the BMW version. Changes to the telescopic forks over the years were mainly cosmetic. All models were initially fitted with upper shrouds with ears for the headlamp, which was replaced by a cowl, nicknamed ‘cowpat’, in 1953. A one piece top shroud and headlamp unit came next, nicknamed ‘top hat and trousers’, in 1958 for the A and B groups only. The M group returned to the first set up with the headlamp mounted on ears in 1958 except for the AA model, which had this type all along. Other exceptions are the Super Rocket and Road Rocket, which were fitted with the headlamp ear shrouds; the Spitfire that had short top shrouds with ears and rubber gaiters and of course the Gold Stars, which are outside the scope of this worthy tome. Some later super Rockets were fitted with the cowl providing only the speedometer was fitted. All C10 and C11 models had the headlamp ears; C10L used a Bantam fork for 1954-55 with a hood over the headlamp and changed to one with headlamp ears in 1956. The C11G and C12 used a different fork also with a hood. There are many other detail differences particularly to the fork legs and yokes. 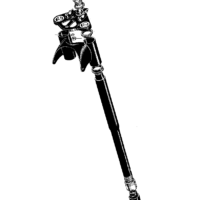 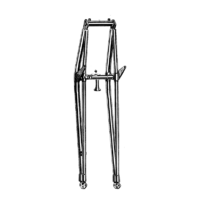 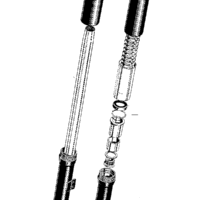