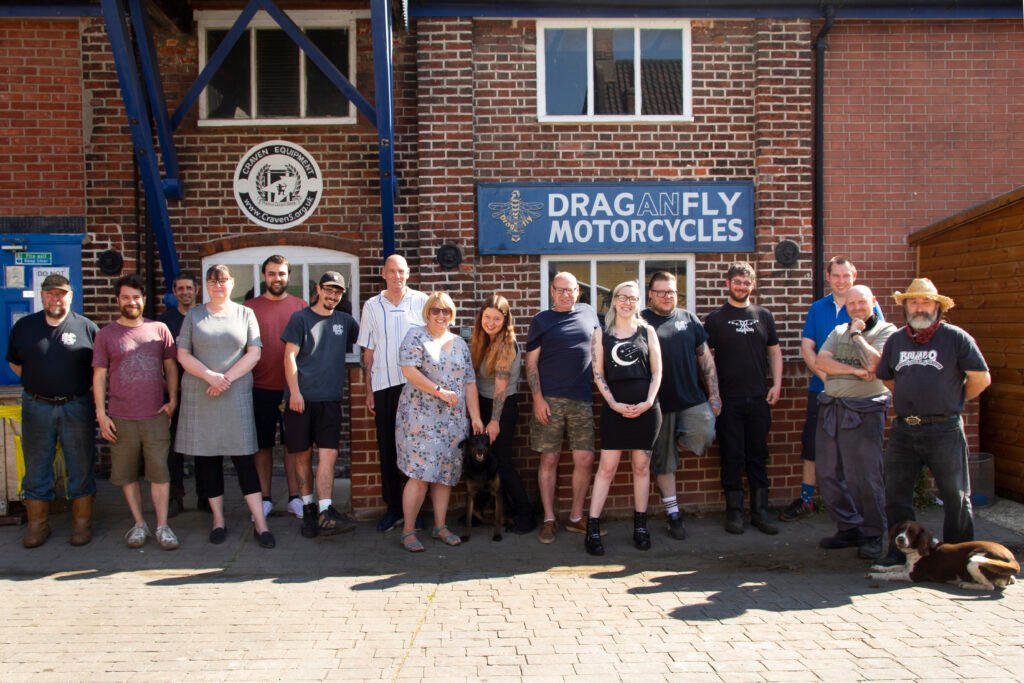 Draganfly Motorcycles is a family run business, now in its second generation, with over forty years of experience and passion for old British bikes. We currently have fifteen staff (not including Iain who is in charge and Roger, his father, who still helps out occasionally). Five are dedicated workshop dwellers and ten work behind desks, on the phones and in the warehouse. Everyone who works for Draganfly rides motorbikes or works on engines (or both!). Among our staff are engine builders, award winning custom engineers, military re-enactors, motorcycle writers and two-wheeled fanatics. When out on our bikes we’ve ridden the TT circuit, broken down on top of mountains, been stuck in the snow and fallen off at high and low speeds (sometimes stationary, but the less said about that the better). When in the office we’re happy to answer questions about anything bike related and we’ve even been asked to consult on magazine features. Our workshop makes lots of our stock items and undertakes rebuilds (we often have a lengthy waiting list) and also houses our sister brand Craven Equipment making classic motorcycle luggage. The only thing we won’t do is valuations, not our area of expertise! Read more about our history below – 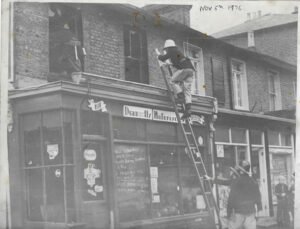 Roger formed Draganfly with a friend called Jim in August 1976 with a lock up shop in Walthamstow, East London, that was awaiting demolition; the rent was a whole £5 per week. At that time they were doing general repairs to lots of local mopeds and commuter machines. They always wanted to specialise in some aspect of motorcycles and thought that they might go into drag racing, hence the name, originally written as Drag-an-fly. After opening at 181 Markhouse Road, Walthamstow, in August 1976, Roger managed to start a fire just a few months later on November 5th, while removing a petrol tank from a Honda (see local newspaper photo left!) but Drags carried on in the charred remains, the premises now really only worth £5 (freehold). Roger was riding a 197cc Francis Barnett, his Triumph having been stolen and the insurance money used to start the business. Anyway the Fanny-B blew up and he was offered an Ariel Huntmaster for £60, which he bought. It was immediately christened Attila the Huntmaster and they started to learn about Ariels. One of the first things they learnt was that, although they were fine machines, there was no public source of spares. 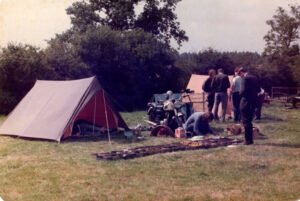 The late Uncle Ted, that well known character from MCS, asked Roger if he was interested in buying a job lot of Ariel spares that he had acquired and did not really want. The spares were bought for £60 and the next month Roger took them to the Ariel Club rally at Caddington on a Triumph Saint with float side car, laid them out on the grass and came back with what looked like the same amount of spares but £200 the richer (right). This was a serious amount of money when £40 a week was the usual pay. Roger was introduced to some of the characters in the owners club, a surprising number of whom are still with us.

Jim left soon afterwards to pursue a career in the police force in Wales! Roger was now on his own with Dave ‘Woolyhead’ the mechanic and didn’t fancy the responsibility on his own so persuaded Graham, his brother, to join him. He agreed and must have liked it because he worked at Drags until 2009. In 1981 the local council decided that they wanted to demolish the shop for re-development and so the business was moved to High Road, Leytonstone. This road was to motorcycles what Saville Row was to suits. It was also a busy thoroughfare and this being London it was not so much passing trade as stationary trade. A lot of old dealer’s stock was bought up over the next few years and an increasing range of parts were manufactured as Draganfly built up a reputation for being THE place for Ariel spares. From the start it was decided to provide a service and to make all the essential parts and not just the fast moving, high profit lines. As there was little competition it was possible to make a good profit on the fast moving lines which subsidised the slower moving ones. Sometimes parts were sold with little or no profit in order to supply as wide a range of parts as possible and so a better service.

An agency for Garelli mopeds was taken on but didn’t last long, neither did one for Jawa and CZ some time later. Dave Woolford, who had been the mechanic for many years, had left to work at a large modern dealer and Paul Wiggans aka ‘Grubby’, took his place. 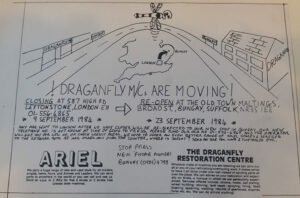 After 3 years in Leytonstone, space was running out and as Graham and Roger are really country boys, Draganfly moved, for the 3rd and hopefully final time, to Bungay in Suffolk. By now about 75% of the business was by mail order so it was reasoned that the business would survive given the lower cost of living in the middle of nowhere. Paul moved with us and a local guy by the name of Nick was taken on almost straight away as the mail order side increased. Paul left after a few years to train as a teacher and is now working, as a teacher, in New Zealand, where it is understood that he has finally finished the I.S.D.T. KH that he started whilst still at Draganfly. Draganfly have been in Bungay since 1984 and they still enjoy the (usually) quiet market town.

In 1996 a decision was taken to expand into BSA spares and to this end Michael Freeman’s stock of BSA parts was purchased at auction. Indirectly and more importantly they also acquired the stock and records of Lewis’s of Weybridge, a very old established BSA dealer. This provided a good base to build from; initially it was decided to concentrate on the pre-unit models as these were less well catered for than the unit models. After about 18 months the sales of BSA pre-unit parts was so encouraging that it was decided to cater for all BSA models, so a further expansion and investment was required.

Nick left to pursue a career in decorating, we believe, and Mick joined us in 1990. He added to Draganfly’s Ariel knowledge with his own knowledge of military machines and BSA’s in general and has been with us ever since.

In 1992 the business truly became a family one as Roger’s daughter Lauren did her first day at the shop, at the age of 11. She has been here on and off in between university and traveling since then and has been full time for the last few years. She passed her motorbike test in 2002 and rode an Ariel (badly) with the AOMCC around Germany and Denmark.

Already a keen rider, Roger’s wife Janet became part of the team in 2002 and subsequently so did her dog ‘Gulle’ (who bears more than a striking resemblance to Black Shuck, the demon dog of Bungay!). He became the third Draganfly dog after Graham’s old dog ‘Flint’, that some of you may remember, his more recent Spaniel ‘Spud’ and subsequent puppy ‘Chip’.

‘Diddy’ Dave was taken on in 2003 to cover the engineering side of the firm, although his background was in cars, with his attention to detail he soon became part of the furniture. Diddy worked with us until his retirement in 2011.

In 2004 the family run bike business was complete as Roger’s son Iain joined and soon dragged old Drags into the 21st Century with a website and online shop to make it’s appeal truly worldwide.

In 2007 Draganfly acquired the old Craven luggage moulds and stock. Many years later the luggage is now in production (read more about that on the Craven Website).

Trevor was recruited after hanging round the shop and chewing everyone’s ear off. With a passion for 250cc BSA’s (something no one else covers here) and endless enthusiasm, customers soon came to know him! Engineer Chris took over from Diddy Dave in the workshop and was the youngest member of staff at 28 years old and one of the best welders we’ve seen. Chris’ father Bob joined the engineering team and brought his years of knowledge and dependability to the workshop. Alice then beat Chris to the title of youngest staff member, by beginning work with us after school at the age of 15. A keen VW fan and engine builder herself she soon became an asset. A Colt aficionado (if there can be such a thing) joined us shortly after, by the name of Sam and one of the friendliest chaps to have ever graced the telephones. We also took on IT guy Lewis to help keep the website up to date as more and more of our business was moving online.

In the Autumn of 2013 we bought a truck load of stock from Domi Racer, a US wholesaler who shut-up shop. Anyone who visited us in the months following will have seen the mountain of boxes we had to sort through, some of it treasure, some of it….not. Just before Christmas of the same year we acquired a lot of John Budgen’s stock as he decided to finally retire (happy retirement John!) where we found some rare parts and project bikes.

Consummate two stroke rebuilder Colin joined the team to take over stock control and ordering (as Mick headed downstairs to concentrate on engineering) and immediately made himself popular by making everybody tea each morning!

In December 2016 Supreme Motorcycles was bought by Draganfly, kickstarting our venture into Triumph spares! After moving over 30 crateloads of stock, our shelves are bursting at the seams! We can provide for more makes than ever before! The acquisition added more than 4,500 new product lines to our spares emporium.

In March 2019 Draganfly acquired Peter Barker’s rubber extrusion business (a small business making small rubber parts). This meant we could make little, but crucial, rubber parts that wear with use such as cush drive rubbers and Lucas electrical covers.

The shop now spans two floors, has over 20,000 customers worldwide. Draganfly use modern technology to provide a top service, have highly rated staff and insist on a wide range of high quality spares, all of which means that they are not always the cheapest but they believe that a good service is worth paying for. Thousands of happy Ariel, BSA and now Triumph customers over the years stand testament to that.