Back in the dawn of time, Ariel or Components Limited as they were then, made their own gearboxes but used other people’s engines. By 1926, when Valentine Page arrived on the scene and Ariel started building their own engines, they began buying other manufacturers gearboxes. Initially a Sturmey-Archer gearbox was used on the cheaper models and a Burman model ‘Q’ on the others; this can be distinguished by the chrome circular cover plate over the kickstart quadrant and a tapered mainshaft section for the clutch. There are other Burman gearboxes to the same design and of similar appearance including the lighter weight model ‘R’ (used on Colts and inclined models) and the ‘T’ model used on the 3 speed versions of the NF, VA and VF manufactured between 1933 and 1935.

The ‘BA’, introduced in 1931 and the ‘CP’ introduced in 1933 were 4 speed gearboxes of  identical design and sharing many parts, the difference was in the size of the components, the ‘BA’ being much more robust. Initially the gears had large engagement ‘dogs’ as on the ‘Q’ box but these were altered to many more smaller dogs in 1934. Although a foot change mechanism was fitted to the 1932 VH it was a bolt on external after thought, a proper enclosed footchange mechanism appearing in 1934, initially as an option, later to be standard with the hand change version becoming optional. Until 1936 the clutch push rod was adjusted at the clutch end and the clutch operating arm was cast steel mounted within a fork cast into the outer gearbox cover. In 1936 the outer cover was altered to accept a push rod adjuster and the clutch arm became a pressing mounted over a single pillar on the case.

During 1952 the Burman ‘GB’ gearbox replaced the ‘CP and ‘BA’ types on all models and is of much cleaner appearance as the clutch arm is inside the outer cover, but it should not be confused with the so called ‘BAP’ gearbox fitted to Panthers and AMC models which is a ‘BA’ (or ‘CP’) gearbox with the same enclosed clutch mechanism. The internals of this gearbox are the same size as the earlier lightweight ‘CP’ model but appear to cope well enough with even the largest bike in the range. With the exception of the GB47 gearbox fitted to the HT all the GB gearboxes are identical except for a few important details. The SQ 4 version used a different kickstart ratio, a longer sleeve gear to give extra support to the clutch and a longer mainshaft to reach the clutch. The singles and twins are all identical but the mainshaft length was increased in 1956 to make room for the fully enclosed rear chaincase by moving the clutch outwards, at the same time the chaincase inner, battery carrier and engine sprocket spacer were also altered. If you have problems with the clutch rubbing on either the inner or outer of the primary chaincase, check the length of the large plain section on the mainshaft.

After the war all gearboxes were stamped with a code on top of the kickstart case that shows the gearbox model number, followed by a letter for the month (A = January) and then two digits for the year of manufacture. Because gearboxes are less likely to be changed than engines they can be useful for determining the bike’s manufacturing date, but bear in mind that the gearbox may have been in the stores for some before being fitted to a machine.

Burman introduced alterations at the start of the calendar year and not in September so there is usually some overlap between the years, the most noticeable being the introduction of the GB gearbox in January 1952, some 3-4 months into the 1952 model year, that started in September 1951. 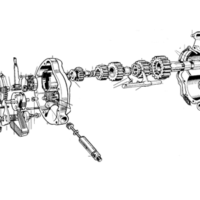 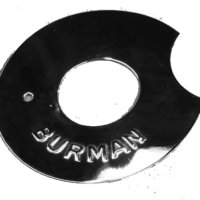