We have a large selection of tyres and tubes. Remember, if you order 2 tyres together then you can save on postage.

Fortunately there is now a wide range of tyres available with the correct sizes and appearance and supply of these is pretty good. Should you wish to fit something more modern, size can be a problem as can supply, with manufacturers constantly vying with each other to produce new tyres. We can supply any currently available tyre to order in a few days and at competitive prices.

The profile of the front tyre should be the same as, or more rounded than the rear but never less rounded. The usual choice is a ribbed front and universal or block tread rear. Ribbed front tyres were around at least by the early 1930’s and were usually fitted to the more sporting bikes, whilst the de-Luxe and touring models usually had the universal or block tread tyres fitted to the front as well as the rear, as they last longer.

There have been 5 schemes of listing tyre sizes over the years starting with referring to tyres by the overall diameter of the tyre rather than rim diameter and height, for example a standard 3.50” x 19” was listed as 3.50” x 26”; rim diameter equals the diameter less twice the height, however this method causes problems when the tyre is 3 1/4” wide! This was replaced in the early 1930’s by width x rim size. In the late 1960’s the low profile tyre was born that required a new method of marking so the width marking was increased by .6 in most cases, in our example the 3.50” x 19” became 4.10 x 19. A low profile tyre is one that is wider than it is tall; our 3.50” tyre was still 3.50” tall but 4.1” wide. At some point tyre sizes went metric and as other profile ratios were coming in that was included in the size as well. Some of these will fit the older bikes but are to be avoided as they will upset the handling geometry and centre stands will be too close to the ground. The 4.10 x 19 became 110/90×19, i.e. the tyre is 110 mm wide and the height is 90% of 110 mm, rims are still made and listed in imperial sizes. The latest scheme is to replace the width by a 2 letter code, the first letter is always ‘M’ and our 4.10×19 has now become MN90x19, bureaucracy gone mad!

All models were fitted with a WM2 x 19” front rim as standard except for the Red Hunters, which had WM1 x 20” until 1955, although pre-war Colts were fitted with a 20” rear tyre and the OG had a 20” front as well. Rear rims were also WM2 x 19” except for the 1937-58 Square Fours, which used WM3 x 18”. As with any other aspect of Ariel it was possible to order whatever could be fitted and was available.

Original Style Tyres Ariels fitted many makes over the years, no doubt dependant on where the best deal could be obtained but most commonly Avon’s were used. The Dunlop TT100 tyre was not available when our bikes were new as it came out in the late 1960’s but was a popular fitment among the ‘boy racers’ of the day and does not really belong in the ‘Modern Section’. The K81 version is rated to 130 mph; the K82 version is rated to 112 mph.

Tyre and Wheel Tools and Accesories 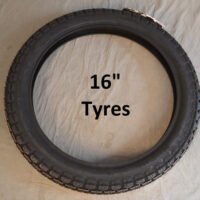 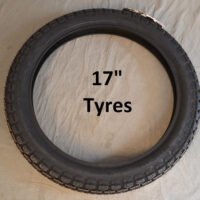 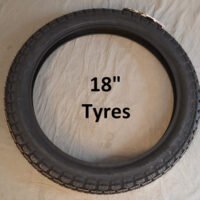 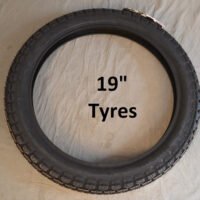 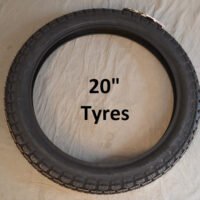 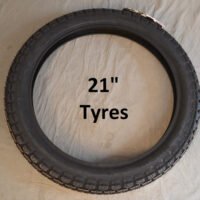