For HT lead click here. All switches are for 7/8″ handlebars but the 31278 dipswitch can be filed to suit 1″ handlebars.

The twins cut-out switch story is complicated and inconclusive. According to the Lucas lists for the KH magneto it was provided with a cut-out in the end cover until 1954; however a handlebar mounted switch is also listed, probably because the replacement magneto did not have the cut-out. The 1954 FH had a clamp on switch and both twins were fitted with a small switch that screwed to a bracket mounted on the left rear handlebar clamp stud.

The singles are easy, they don’t have one, although when we are occasionally asked for one we suggest using the exhaust lifter, come on, we all had to learn once and it is nice that there are some new people appreciating our old bikes.

The lighting switch (the one that turns the lights on and off as opposed to the one that dips and un-dips the headlamp) is pretty straight forward. Early ones for use with 3 brush dynamos and the like included a ‘charge’ position. Most that were fitted to W/NGs included a ‘convoy’ position so that only a tail light was visible, as long as the faint red glow in front was kept in sight you were all right, possibly. There are several other variations of this switch but all can be wired to do the same job, ours are supplied with a wiring diagram, I doubt that the Ebayers will supply you with one. A longer knob was fitted in conjunction with the alloy top yoke as it was a bit difficult to operate with the standard short knob. The dip-switches are easy enough until we arrive at 1956 when the horn button that was screwed into a hole in the handlebars in 1955 is still listed in the parts book for 1956 to 1958 as well as a combined dip/horn switch. Lucas parts books only list the dip/horn switch, I have listed both options, but I think that the dip/horn switch wins, as a separate dip switch is not listed anywhere; are you asleep yet? 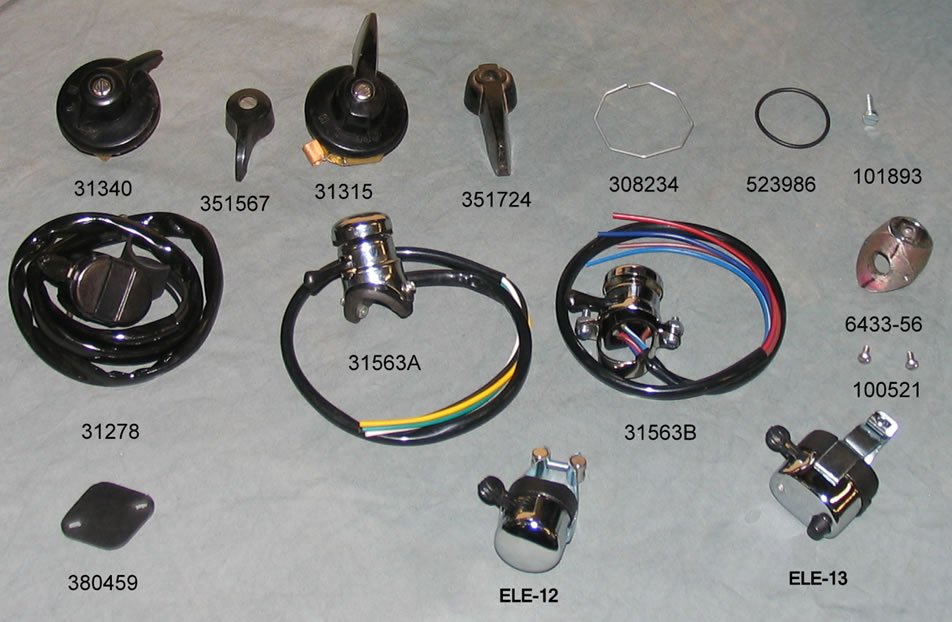