We repair your old unit rather than exchanging it for a reconditioned item as costs can vary and it means that you will keep your original unit. The unit is stripped down, cleaned, plated and painted before being assembled with the necessary new parts which will always be a new or re-wound armature, bearings and brushes. Finally the unit is tested before being returned to you. All units are fully guaranteed, not just for 1 year but consideration will be taken into account of the mileage covered, mind you I cannot remember the last time we had one returned as faulty. Always tell us which bike the unit is to be fitted to and the polarity if it is a dynamo. Standard is negative earth up to about 1949 and positive earth after that. See the technical pages on the web site for details of 12 volt conversions and electronic voltage regulators. Average prices are given in the price list using the following codes.

40 or 60 Watt, that is the question; the answer is 1 field coil screw is 40 Watt, 2 denotes 60 Watt. The direction of rotation of a component is always as viewed from the drive end.

A Magdyno lighting set was first offered as an option in 1926 at £9/10/- it added 20% to the cost of a basic Model A and the Magdyno was mounted in front of the engine. In 1927 the magneto was moved to behind the cylinder where it stayed until the end but in 1929 if a lighting set was fitted a separate dynamo was positioned in front of the engine rather than a Magdyno. With the introduction of the Square Four and the Slopers in 1931 the dynamo moved back to sit on top of the magneto, which is where it stayed. By 1936 a lighting set was standard fitment. The twins were fitted with a separate magneto and dynamo that were bolted directly to the crankcases; the dynamo at the front and the magneto at the rear. Most of the early KHs used BTH magnetos.

‘Magdyno’ was the Lucas trade name for the combined magneto and dynamo unit; there is only a physical connection between the 2 components to transfer the drive, no electrical connection. The magneto is a self contained ignition unit incorporating a low voltage generator, contact breaker and high voltage coil to provide the spark. The dynamo generates electricity to charge the battery and as the voltage increases with speed it must be controlled to prevent over charging.

The early dynamos, made before 1936, are known as ‘3-brush’ models; the 3rd brush mounted inside the end cover performs part of the charging control, more is covered by a small control box and even more by the rider. It is usual practise to convert these dynamos to the later type given the greater reliability and the fact that the alteration does not affect the external appearance. The 1936-48 or 1949 dynamo had 2 brushes, produced 40 Watts and was linked a new control box called MCR1 that did everything, no rider input required. In 1948 or 1949, depending on model, the dynamo was lengthened so that 60 Watts was now available and the control box was altered to suit becoming MCR2. All these dynamos are similar in operation and appearance but there are a number of cosmetic changes over the years as well as various end castings to suit different applications. The exception is the large dynamo fitted to the Square Four from 1949; model C35SD, also used on some Royal Enfield twins. This dynamo produces about 75 Watts and is physically much larger than the standard type partly due to it having two fields coils.

Converting to 12 Volts and Electronic Regulators

It is nowadays very difficult to find an original mechanical regulator box in good condition and the only replacements are the type for the 40 Watt dynamo and are made in India. The modern electronic replacements will provide many years of trouble free use, providing the instructions are followed; indeed members of staff have covered more than 50,000 miles without trouble. These electronic marvels are small enough to fit inside the old regulator and are therefore undetectable in use. The units come complete with comprehensive instructions but as the instructions point out a new regulator will not fix dodgy wiring or a duff dynamo! When ordering, the correct polarity must be chosen but all units are 6 Volt as supplied, conversion to 12 Volts is by simply snipping a wire. These are the only regulators that we have found that will work with the large Square Four dynamo.

If converting to 12 volts the battery and bulbs will need to be replaced but the horn should be OK as long as it is not operated for extended periods! Due to the higher voltages involved the dynamo will not cut in as early as it will with 12 volts, typically it will not be charging at 30 m.p.h. in top gear, especially if the gearing has been raised and this is a real problem on the SQ4 especially so because the ignition system relies upon the battery. Unless the bike is to be used a lot after dark or high mileages are expected a 12 volt conversion is probably not worth the trouble, a 6 volt system is perfectly adequate providing the connections are maintained in good condition. If a 12 volt conversion is tried and charging is a problem a 12 volt armature and field coil will lower the revs at which the dynamo will commence to charge and this does work well, although not available for the SQ4. Also when converting to 12 volts the largest battery that can be fitted should be used as the dynamo can be destroyed by using a small battery as I found out to my cost at 4 o’clock in the morning in the middle of France. See the end of this section for part numnbers. 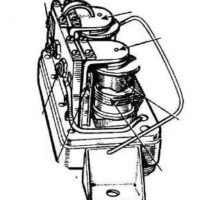