Ariel made their first small capacity motorcycle in 1929, for 1931-32 it was redesigned with an inclined engine and for 1933-38 it was a smaller, and therefore rather overweight, version of the larger 350 and 500 models. The 1939-40 model used a slightly modified engine in lighter cycle parts but unlike the other models it was not re-introduced after the war. Fans of the smaller machines had to wait until 1954 for another lightweight Ariel. When it arrived it was described by some as a BSA parts bin special with Ariel badges. The engine and most of the cycle parts were indeed BSA components but the gearbox was supplied by Burman as on all of Ariel’s bikes from the early 1930’s but the clutch was from the BSA C group models.

The engine was taken from the BSA C11G but fitted with an Ariel cylinder and head to reduce the capacity to 200 cc. The frame, rear suspension and rear wheel were taken from the 150cc D3 Bantam and were also used on the cut price BSA C10L, however the forks and front wheel were as used on the C11G and were a bit more substantial. The petrol tank and badge were of course Ariel. 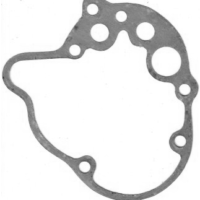